Evergreen fern with dark green leaves, one of the most common ferns of PA

A common site in Northeastern woods, Christmas fern is an over-wintering fern with fronds of rich, dark green and bristly pinnae that grows in clusters(clumps) from a central rootstock.  Upper parts of fertile fronds are noticeable smaller, narrower, and wither in winter.  This fern is not very picky and will grow in almost any soil.  For this reason, it can be used to ameliorate the quality of the soil and prevent erosion.  It is easily cultivated and will grow well in rich, moist soil in a shaded area of your garden.  This fern hybridizes with another fern within the same genus - Braun's holly fern.  The scientific name comes from the Latin akrostichis (meaning 'straight line') which refers to the upward linear growth of the fronds.

Abundantly grows in a variety of soils, with a preference for rich, limy soil. Common, particularly in forests, wooded stream banks, and ravines as well as on rocky, shaded slopes.  Can grow in moist to moderately dry(well-drained) sites, in sub-acidic to neutral soil.  Present throughout Pennsylvania.

Ranges south to Florida, west to Texas, north to Minnesota.

Fiddleheads start to unfurl in April.

The sterile fronds and the non-fertile parts of the fertile fronds stay evergreen.

Fronds lanceolate, up to 32 in (60 cm) long and up to 5 in (15 cm) wide; rigid and deep green.  Fertile fronds are taller, more erect, and rigid; with only the upper portions bearing spores and contracted at the summit.

Blades once pinnate, leathery, lanceolate, tapering rapidly upward from the middle.  Smooth on upper side and linear scales on under side. Cut into 20 to 40 pairs of pinnae.

Pinnae linear-lanceolate, up to 8 cm long, somewhat acute at the apex.  On upper side, there is a prominent basal lobe, or 'ear' (one of the most distinctive characteristics of this species).  Edges of the pinnae are bristle-tipped with appressed (pressed closely together) teeth curving upward.  The two lowest pinnae are almost opposite and often angled downward (which makes it possible to identify this fern in its beginning stages when the basal lobe has not yet formed).  The other pinnae are alternate, fertile ones significantly smaller than sterile.

Veins forked, reaching to the margins.

Sori numerous, large, round to oblong in 2 or more rows along the midvein.  Often completely covers the back of the pinna when ripe.  Colored tan to light brown.  Indusium is round and attached to the center, disappears as the plant matures.

Stipe about 1/4 of the blade, brown at the base, green otherwise.  Scales are dense, of light brown, getting smaller moving up the stipe.

Growing in circular, arching clusters, this fern is most easily recognized by its prominent basal lobe (ear) reminiscent of a Christmas stocking and deep green, long-lasting fronds.

Upper parts of fertile fronds are distinctly narrower and smaller.

Sterile fronds and non-fertile portions of the fertile fronds stay evergreen throughout winter.

No changes since the Cronquist classification. 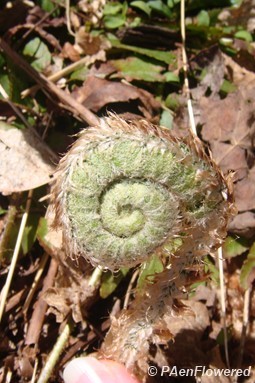 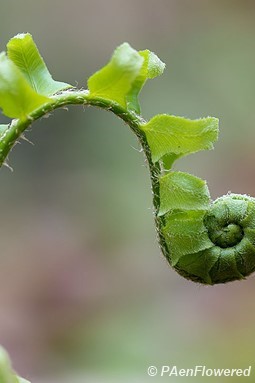 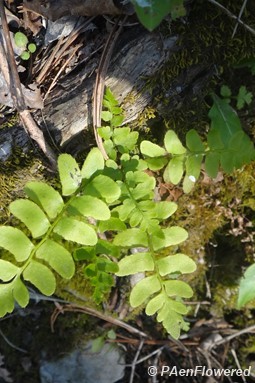 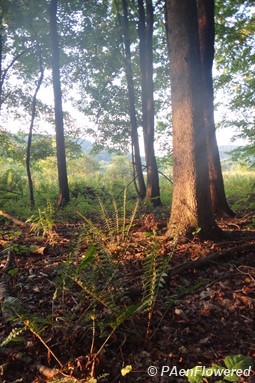